Our namesake is Abigail Scott Duniway. Abigail was born October 22, 1834, near Groveland, Illinois. Abigail Jane Scott traveled over the Oregon Trail by wagon train with her family in 1852, when she was just seventeen. She had little formal schooling, but was a capable writer whose assigned task during the journey was to keep the family trail diary.

After arriving in the Willamette Valley, Oregon, Jenny, as the family called her, began to teach school near the present-day community of Eola, Oregon. At age 18 she married, but even then was spunky enough to have the word “obey” omitted from the wedding vows. Her husband, Ben Duniway, a gentle, supportive, understanding man, had not married within two years of arriving in the territory, so was ineligible to claim additional land for his wife under the rules of the Donation Land Act. The new Mrs. Duniway, ever the independent, had refused to file a claim herself because she didn’t want anyone marrying her for her land.

​Writing the trail diary had ignited something in the young woman. In spite of being swamped with household duties, farm chores, and the never-ending responsibilities of being a wife and mother of three preschoolers, she needed more. She needed to write. So, write she did. Abigail Scott Duniway, as she eventually signed her work, submitted numerous poems and articles to local newspapers. In 1857, she wrote the first novel to be commercially published in Oregon. Her fictionalized tale of a family’s journey by wagon train to Oregon showed a strong awareness of the inequalities facing American women. She never deviated from including that viewpoint in her future work, either.​ 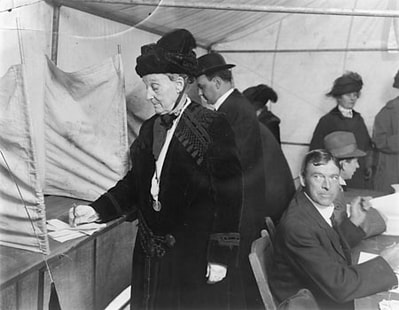 Women’s suffrage became her cause. She lobbied across the states of Oregon, Washington, and Idaho for the right for women to vote. She brought Susan B. Anthony and other nationally known suffragists to Oregon. She angered the Temperance movement by declaring that tying women’s suffrage to temperance would be counterproductive. Five times she lobbied the Oregon Legislature to put women’s suffrage to a vote. Four times it was defeated, quite possibly because the temperance movement remained firmly identified with the right to vote for women.

Finally, in 1912, the tide had turned, and Abigail Scott Duniway was honored by becoming the first Oregon woman registered to vote in a national election.

In 1914, she cast the first ballot in such an election here. A forty-two-year battle was won. Abigail Scott Duniway had changed her world for the better, not only for herself but for all women. On October 11, 1915, a few days before her eighty-first birthday, she died in a Portland, Oregon, hospital. For further reading on Abigail Scott Duniway and her life, you can visit the​ website Oregon Encyclopedia​.
For more information on how to become a member of DAR, email our chapter or you can click the contact us link up above to send us a message. We are honored to introduce new members to the NSDAR organization and its many ways of bettering our communities and nation. Much more information may be found at either the National Society Daughters of the American Revolution (NSDAR) website or the Oregon State Society DAR (OSSDAR) website.
webmaster
Powered by